About Simone Biles and Mental Health

Finally, it’s the Olympic Games!  I remember getting so excited for the 1984 Olympics in Los Angeles, watching the Opening Ceremonies while checking off the delegations on my world atlas.

That was five months after my mother sat us down to watch Torvill and Dean in Sarajevo, the only perfect Olympic ice dance performance in history.  Little did I know then that I would become an ice dancer myself, decades later. 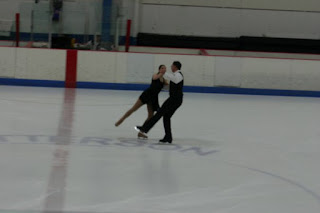 It's not the Olympics, but definitely nerve-wracking!

We were glued to the television set those 16 days in the summer of 1984.  From Mary Lou Retton to Carl Lewis to the first women’s marathon, I loved all the Olympic sports we didn’t normally see on television, and like most kids, dreamed of being an Olympian.  Of course, it was pretty clear that I just didn’t have the athletic talent to get there, nor the dedication to do the same thing over and over and over again for years to achieve that dream.

Still, watching the Olympics became a regular tradition, and now having participated in both a Winter (figure skating) and Summer (marathon running) sport, it’s very special to feel a connection to the stories playing out on television.  I know what it’s like to face a panel of skating judges or trying to manage a hot, sunny race day.

This is what I will tell you, after two decades of athletic training:  it is HARD to be an Olympian.  You train day in and day out in relative obscurity to perform your best at one competition that only occurs once every four years.

Or, if the world shuts down due to a global pandemic, five years.  2020 was a terrible year to be an elite athlete.  Facilities closed and locked down.  Competitions cancelled.  And when they announced that the Olympics would be postponed, many couldn’t turn to the one thing they’ve done for decades to soothe their mind—practicing their sport.

It’s been a very long fifth year for these athletes, and watching these Games, it’s very clear it is a very different Olympics.  Parents are watching from home.  Audiences are made up of media and fellow athletes—at least, those who are still competing as they are sent home as soon as their events are finished.  For the athletes, who are used to competitions being a certain way, it must be discordant, disruptive, and distracting to not have a full arena of cheering crowds—or more importantly, a hug from Mom and Dad before their event.

Like so many others, I was shocked that Simone Biles withdrew from the ladies’ team final due to a mental health issue, but once I saw her vault, it completely made sense.  Even though she had made little mistakes at both the trials and at qualifying, that vault was just….wrong.  It was very clear her mind was in a very bad place, to the point of danger.  Thankfully, she was able to land on her feet instead of her head, go backstage to talk with the team doctor, and make a decision that kept her safe.

….and social media exploded.  Armchair experts, criticizing her decision, telling her that the Olympics are about “pushing through” challenges.  People who can’t do a cartwheel or somersault, never mind a double twisting double pike, thinking they know what’s best for an athlete who has spent the past five years mastering her sport for this very moment while juggling the responsibilities and expectations of federations and sponsors.

It was too much, and her mind….broke, separating from her body to the point that she could no longer physically do her sport.  Had she broken her ankle or—gasp—been taken off the floor on a stretcher on her way to the ER, there would be outpourings of sympathy, but since she is physically fine, it didn’t make sense to people who honestly, don’t understand how mental health really works.

Well, it made perfect sense to me.  It seems so long ago when I was running negative splits through Central Park in the New York City Marathon.  Taking a break to heal after the marathon turned to hustling multiple jobs to keep my head above water to surviving a global pandemic.  Just like many who struggle with mental illnesses, the stress over furloughs and disease and isolation and “not normal” triggered my OCDP contamination fears to spiral out of control, to the point where making a plan to run with friends is dictated by the various anxieties and rules created by my illness.

Physically, I’m fine, but it has become so much a fight in my head to go running that I can’t.  It’s not something I can think away or push through or get over myself, because that will trigger a full-blown, self-destructive panic attack.  Like Biles, I have to find a way back to the basics, back to figuring out a way out of this hole, because I still have three marathons to run, including Boston. 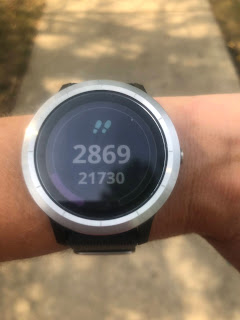 Cashed in some gift cards for a new toy...just working on that insane step goal right now.
However, it’s not just about sports.  I struggle getting out the door of the house on time because I just can’t get my hands correctly clean.  People suffering from depression literally cannot get out of bed in the morning, while anxiety sufferers can get trapped in their own worried thoughts.  So many people having to fight their heads, their thoughts, every day—just to be a functional, productive member of society.

We have all faced mental blocks.  Maybe it’s a task that you just can’t start—or can’t finish.  Maybe it’s overcoming a fear or anxiety.  Maybe it’s having a confrontation or difficult conversation.  We have the training, the skill set, the ability to do it, but our minds just scream, “no!”  When your mind is blocking you, even from doing something you love, there is no escape.

And when that block is about twisting and flipping and trying to land on your feet, you have to withdraw from the Olympic Games.  Even though these athletes make it look so easy, it’s not.

After watching Mary Lou Retton win the all-around gold medal in 1984, I asked for—and received—gymnastics lessons.  I realized very quickly that not only did I not have the strength to do the basics we were learning in our group lessons, but that I was scared to do simple skills like handstand roll downs and back walkovers.  Gymnastics is a dangerous sport, and after my first meet, I decided it wasn’t my thing, moving on to the much safer ballet and tap dancing.

(I never did ask for figure skating lessons because I knew they happened before school, and my mother struggled to get us to school on time as it was.  Ah, hindsight.)

It’s not a surprise that so many Olympians and professional athletes have supported Biles in her decision to withdraw from the Olympics.  Every top athlete lives with the pressure from the obligations they have to their sport, their federation, and their sponsors, never mind what they place on themselves to keep winning, to keep succeeding.  At that level, it’s not enough to be at their top physical condition.  They have to be mentally strong to overcome all the nerves that come with being on their sport’s greatest stage, and over the years, we’ve seen many talented athletes come up short as their minds struggle with the stress, stress that many sitting on their couches at home take for granted because it’s so invisible.  Until Simone Biles said, “I can’t.”

Simone Biles might come away from Toyko without a gold medal, but she has given us all a lesson in mental health.