You. Yes, YOU can Stop Election Fraud

I’ve seen a lot of hand-wringing about election fraud, from my Facebook friends to Presidential candidates.  Things like ballots being in trunks of cars to dead people voting are no longer jokes.  From my experience as a political operative, most of these stories of fraud come down to incompetence, whether on the part of the voters, the officials running the election, or even the local party offices.  While in most cases these incidents involve such a minority of votes being cast that they only impact the local and regional elections, we all saw in 2000 that they can—and do—affect our national elections.

However, there is a solution.  The way to stop election fraud is to reduce the amount of incompetence in the system….and that is actually easier to do than you think.  In the days of smartphones and social media, the information is at the tip of your fingers, so here are three things you can do to help fight election fraud:

If you think it’s too time consuming and complicated to make a difference, note that Russia and China do as well.  The sheer amount of resources and coordination needed to change a national election result would not escape notice from the multitude of local election officials, especially in a country where local elected officials have the freedom to speak their mind.  As do the media, from the talking heads to the local reporters.  Even the much-maligned Electoral College acts as a deterrent because anyone trying to interfere with our election would have to operate in multiple states, rather than just focusing on upping the vote total in one populous state.  An organized, Mission: Impossible, type operation is truly impossible.

However, when elections are decided by voters who spend more time focused on celebrities and the British Royal family than the happenings in Congress, the misleading ads and the flat-out false mailers are able to change election results.  It’s not isolated to the Presidential race, either.  Actually, since people don’t even know their local candidates, voters are easily mislead by negative ads and mailers designed to push buttons instead of inform.  Not only do these candidates have websites and social media channels, but they take the time to fill out endorsement questionnaires from the local newspapers, giving us the resources to become educated voters and to help educate others.  I mean, should we really be deciding our judges, our coroners, our county clerks based on who is running for President, or should we be picking the best qualified officials with no regard to party affiliation? 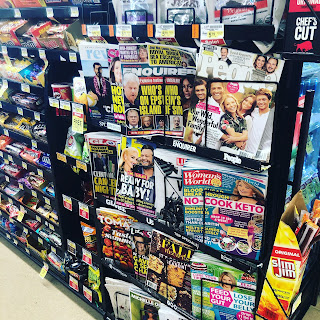 My local grocery store checkout line, filled with celebrities and tabloids, but we don't have time to research local candidates....

How will I be preventing election fraud?  I’ll be voting early in person this year.  If there are any issues, it will still be before the deadline to request a mail-in ballot.  Why not a mail-in ballot?  My state uses signature verification to verify voters, and since I registered to vote in 2004, my signature has changed quite a bit.  After my horrible experience voting in the primary, I don’t trust my county clerk’s office to verify my signature correctly, so I want to make sure I’m present for that verification.  It’s a simple way to ensure that my vote will count, because I’m educated in how our election is supposed to work.  I may even volunteer as a poll watcher this fall if I have the time to make sure other voters are given proper treatment. 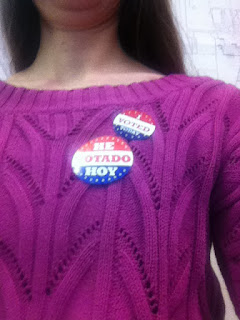 Always displaying my "I Voted" stickers!

Now that you know what you can do, what will you do to stop election fraud?  Will you endorse a local candidate?  Will you post the website from your local election authority?  Will you work as an election judge or a pollwatcher?  If every one of us did one little thing, we can combat election fraud.