I Was on a Break....from Running

Not what I was thinking when I said the 20s would roar. 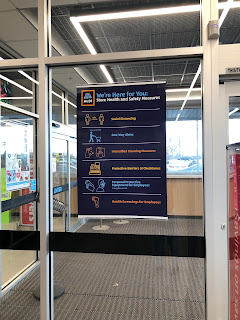 Wait, isn’t this supposed to be a blog about fun and running and traveling around the world?  Well, when the marathons cancel and borders close and the run club stops meeting and you get furloughed from two jobs, running takes a back seat to life.  Life, as we knew it, had changed.

I wasn’t in a good place when this all started.  My mental health took a huge hit last August, and I’ve been slowly trying to get back to functional.  Things that you may take for granted, like the steps you take to make it to work in the morning, are very stressful to my OCD mind.  There are just so many steps, and if I don’t do them right, the anxiety surges, just like an electrical power surge.  Do I have a clean outfit?  Do I have a clean coffee mug in the dishwasher?  Did I remember to brush my teeth?  Did I brush my teeth before I put my shoes on?  Did I make sure to only touch the door handle with my pinky finger?  Did I wash my hands after touching (water kettle, sink handle, laptop keyboard, dryer handle, fridge, or anything else in my house)?  All while trying to get out of the house at a time that gets me to my job on time.  I’m exhausted before I even put my key in the car.

Running, especially running with a group, has all of that, too.  How am I supposed to put my hair in a ponytail without contaminating everything?  Where do I put my purse while I’m running?  What about my car key?  And shoes.  I’m afraid of shoes right now.

It’s so frustrating, after such a victory in New York, to have slid down to a place where I’m going to have to start over from scratch.  Unlike a physical injury, where your body is begging you to stop and heal, you feel like such a failure because you can’t get yourself out there.  The negative thoughts creep in (because your brain is already hurting) about how I’m going to get to do these last three marathons, especially Boston.  I’ve gone from “I can totally qualify for Boston” to “I’ll never run Boston” in the span of six months.

Then I think about why I run and what I love about running.  For me, it’s the meditation, the ability to let my brain get exhausted by the physical effort, to be outdoors and see new trails.  It’s the companionship of friends as well as the quiet solace of an empty trail, hearing only the wind and the birds.  Then I think about all the athletes who not only have seen their competitions and races and Olympics get postponed and cancelled, but also stuck at home, unable to do the training that they love so much, that would alleviate the grief of losing their Worlds or Olympics or Boston Marathon.

Running cannot be a chore.  It has to be my solace, not my obligation.

Quests are never easy.  Even Hollywood fills epic quests with monsters and quicksand and Eyes of Sauron and Darth Vaders.  I knew five years ago when I started my quest that there would be epic challenges (though not a global pandemic that would completely shut down the US for months), and the point of the exercise was how I grow from the challenges laid before me.  So I will face my struggles, heal my mind, and find a new path to traverse.  Some day, I will cross that sixth marathon finish line and kiss the ground. 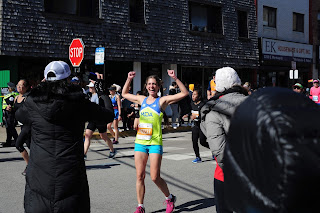 I want to get back to this woman

We are all challenged now with so many things right now.  Just keep putting one foot in front of the other.  Treat each other with love and kindness.  Open your hearts and minds.  Let’s walk together.

Posted by Erin Westphal at 12:25 PM No comments:

The Face in the Jar by the Door

Before I quit skating back in 2011, I had decided my next freestyle program was going to be to Eleanor Rigby.

Lives in a dream

Waits at the window

Who is it for?

I have lived my entire adult life wearing the face I keep in a jar by the door.

It’s understandable, given my childhood.  I was not an easy child for any mother, between the OCD and the high IQ, but my mother came into parenting with the scars of her own difficult childhood.  Today, she probably would have known to heal herself before becoming a parent, but back then, she saw being a wife and mother as her salvation.

She had no idea what to do with a kid who just saw the world so differently than everyone else.  A kid who taught herself how to read and do multiplication, but would get insanely frustrated if things weren’t exactly ordered in her head.  (For example, I nearly had a meltdown on the first day of kindergarten….because the school bus didn’t have seatbelts.  In 1979, when you could drive around in your car without wearing a seatbelt.)

Overwhelmed by the meltdowns and scared of what the world would do to her outlier child, she did what she learned from growing up in an alcoholic family.  Pretend.  She would say things to me like, “you know, you’re not going to have any friends if you act this way.”  “Do you know how difficult you are to live with?”  In eighth grade, I’d have to come home from school, detail every social interaction, and problem solve to see how I could do better.  Every day.

She was determined to jam my square peg into that round hole, even if my self-esteem was destroyed in the process.  Her anxiety over me was so great that she would do whatever it took to gain total control of my life, even into adulthood.

Instead of creating a confident young woman who glided through social interactions, she created a woman who felt the need to pretend to be someone else to garner acceptance.  I created my face in the jar and learned how to navigate life wearing it.  My mother loved “Face in the Jar” Erin better than the person I really was.  At one point, after a sorority Mother’s Day tea, said to me, “why can’t you be like this all the time?”  Because, Mom, it’s an act.  It’s not me.

In the process of healing from the breakup of a four-year relationship, I’ve been reflecting on connection and my connection to the world.  That face in the jar has allowed me to navigate the adult world, but I don’t feel connected to it in any way, shape or form.  I have friends, but not a single best friend who gets me on that deeper level, because it’s hard to let anyone in.  Don’t even get me started about dating, which is all about putting your best foot forward while having a good time….until it’s time to take down the façade and be vulnerable with each other.  My ex once got angry at me because I didn’t trust him.  He was absolutely right, but it never occurred to both of us that perhaps we should have stepped back from our relationship and worked on building that trust.  Instead, he decided that because I didn’t trust him, he had carte blanche to treat me however he wanted.

One of the things that has been tumbling in my mind of late is whether it’s time to leave the face in the jar when I leave the house.  Then I look at the world right now and see all the the anger and vitriol and judgement and closemindedness and intolerance towards each other.  It saddens me that as a culture, we are so dogmatic about receiving conformation about our own beliefs that we have zero respect for someone who disagrees with them.  We are supposed to be a country where each of the 330 million people get to believe whatever they want, but instead, I see a country where if you don’t conform 100% to whatever, you are automatically horse manure…and I’m scared of how I’ll be treated if I didn’t wear my face in the jar.

Eleanor Rigby resonates because so many of us keep faces in jars by our doors, afraid of what would happen if people saw our true selves.  We’re supposed to be the champions of individuality, but instead we force people into silent conformity.  To fix our country, we need to start here, and it’s why I no longer want to hide.