Masks and Vaccines and Paradigms, Oh My!

Last summer, I wrote about how we knew very little about the science of covid, so little that people who grew up learning that science is black and white…..were struggling with the continual changes in information.  It’s been a year, and because we can’t seem to adjust to the changes, this little bugger is still having such a huge influence in our lives: 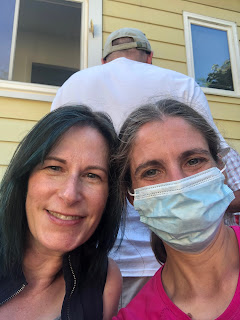 Keeping my friend Katie (and other party guests, hi Steve) safe by masking up.

Last year, I asked you to treat each other with kindness and gentleness, but we need more than that now.  We need to be able to critically think, question what we’re being told, look through multiple sources of information.  We need to be okay with being wrong, and we need to stop judging others, even if they are 384 paradigm shifts behind.

Because we need more people to get vaccinated, so we don’t end up in some strange viral version of Survivor, where our bodies are the island and covid is the contestant….

The semester I fell in love with Thomas Kuhn’s The Structure of Scientific Revolutions, I also read Charles Darwin’s On the Origin of Species.  25 or so years later, we are seeing the two interact in real life, as the covid virus continues to mutate to ensure its survival.  The only way covid—or any virus—survives is to be able to infect hosts, and as immunity builds, it’s not a surprise that we keep hearing that each new variant is more contagious than its predecessors.   When a virus has trouble finding amenable host bodies, it has to mutate to make it easier to replicate—and infect—once it finds someone not immune to it.  Covid understands that its survival requires paradigm shifts.

Our survival requires paradigm shifts as well.  We need to be open to the changes, as well as being kind as so many people are still struggling with more changes in science than they can handle.  I mean, anyone who refuses to adapt to the current paradigm has a higher chance of getting sick at this point, so why be mean?  Covid will be nasty enough.  Maybe not this variant, but one that is much, much worse. 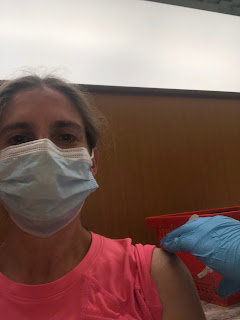 Doing my part to reduce mutations!