Nigel stared at the woman walking along the path.  He needed to cross the path to get to some good eats for lunch, but there was a human in the way.

Nigel was hungry, and getting angry as the woman took forever to cross his path.  He decided it was time to push her along.  He charged, and as he got to her, she looked up, saw the deer, and started to run away, like he had done so many times when he had been surprised by a human.  He smiled and charged.

Her two legs were no match for his four, so it only took a couple of pushes of his huge rack of antlers until she collapsed, dead.  As he returned to his mission for lunch, a wave of power surged over him, the power of someone who had no fear.  He was determined to rule over the humans, and excitedly thought about his next kill.

The trail made for easy targets.  Nobody suspected the buck in the brush, watching and plotting for his next victim.  Never groups, never ones on those speeding by on those machines with the two circles, and never anyone bigger than him.  Usually, it was women, walking by themselves, the slower the better.

While the bodies piled up, the humans were stumped.  Women, walking alone on the trail, killed by being beaten to death in the middle of the day.  There were none of the usual clues or patterns the humans needed to solve the mystery, and soon, the killings became routine.

Nigel would spot his victim and charge until they were on the ground, lifeless, then would go about his business.  When the body would be discovered by another human, Nigel would flee, pretending to be afraid of the flashing lights, the sirens, the flow of people in and out, the yellow streamers.

Sometimes he would go over to where the big boxes with trees on top were parked, listening to the humans chatter into sticks while facing other humans with boxes on their shoulders and snaking cords everywhere.  They would gab on about the “Millennium Trail Killer,” whose motive remained a mystery as the victims grew.

Eventually, it became harder for Nigel to find victims as the humans stopped walking the trail alone.  His bloodlust unsatiated, he wandered around until he found another great trail to catch victims, even if it meant crossing those big, hard paths with the fast-moving boxes that sometimes killed deer.  Bah, he was Nigel, the Millennium Trail Killer.  Nothing could stop him….

One afternoon, he spotted the perfect human, and charged him to death.  High on the thrill, Nigel started the long journey home, not realizing how late it had gotten.

“Another body on a new trail.  The Millennium Trail Killer must have moved.”  Jane said to Mark, her cameraman.  They were headed up to the newest crime scene for the evening news.

“Or a copycat.”  Mark replied.

“A copycat of the perfect crime?” Jane looked at Mark as he drove.  “Doubtful.”

They rounded a curve and felt the unmistakable thud of hitting something.  Mark pulled over, getting out of the news truck to investigate.  He shouted to Jane. 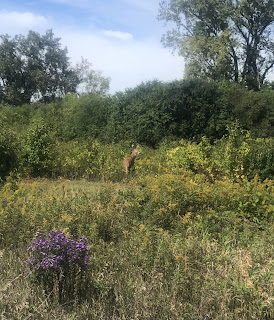 I was so honored to be nominated for the Encouraging Blogger Award by Headphonesthoughts.  Every week, Deborah posts a “Thought of the Week” that always inspires me to do my best.  If you want to be encouraged, Headphonesthoughts is one of the best places to start.  The Encouraging Blogger Award was created by Lisa Mitchell of Fluxing Well with the ‘purpose to recognize bloggers who bring encouragement’ with their blogs.

The Encouraging Blogger Award was created to recognize any blogger who encourages others with his or her posts. Bloggers may encourage others to travel, try new things, have a positive mindset, or overcome adversity, for example. An encouraging blog may encourage other bloggers or give business tips. Many blogs are encouraging and we don’t even realize it. Bloggers nominate fellow bloggers for this award, and nominees write a post answering a few questions. After that, the nominee nominates other bloggers.

I started blogging on MySpace about 15 years ago, when I was a traveling consultant spending 75% of the year on the road.  It was a way to pass the time.  My current iteration started when I decided to run the six major marathons in 10 years, hence “6 in 10.”

My blog started as a running blog to keep me accountable on my marathon training, but has morphed into surviving a global pandemic while coping with Obsessive Compulsive Personality Disorder.  Writing became my therapy, my connection to the outside world.  I believe the power of our own uniqueness, and I’m trying to use my blog to encourage others to embrace theirs.  There is too much of a demand for conformity, especially in a country founded on freedom and choice.

Find your own voice, what makes you exceptional.  It will make you stand out in the endless myriad of blogs.

Use your Notes feature on your phone to jot down ideas if you aren’t in a position to write.  I’ve always got a half-dozen or so ideas floating through my mind, so I always have something to write about.

It’s not a blog goal, per se, but to restructure my life so I have more time to create.  I’m just juggling too many things right now to post the amount of content I have amassing in my head.  It would also be nice to grow in readership and see my posts make the world a better place.

The Winter of My Discontent 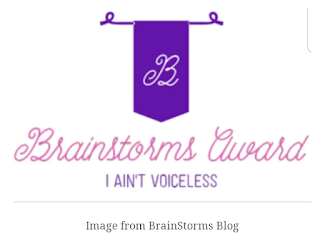 I was honored (and a little surprised) to be nominated for the BrainStorms Award by the Middle Age Fan Club blog.  It’s a great blog about life and teaching and poetry and football—well, what we call soccer on this side of the Atlantic.  It’s my first blog award nomination, so thank you Graham!

It all started with my 40th birthday.  As we all do with milestone birthdays, I lamented all the things I dreamed I would have done by the time I reached 40.  While some, like marriage and family, were beyond my control, I thought about never having visited another country.  Then Abbott announced they were sponsoring all six of the major marathon races, creating a special award if you ran all six.  Three of them—London, Berlin, and Toyko—would mean international travel.  It was too good to be true.  I decided that running those marathons and earning the medal would be the quest to get me through my 40s, and to hold myself accountable, I would blog about my journey.

The quest started well, with a finish in Chicago (my “home” marathon), then a surprise lottery entry into Berlin and an epic New York City race in November of 2019, all while documenting the changes inside myself as I ran and trained and traveled.  I went into 2020 thinking that I was in perfect position to complete my quest by my 50th birthday…until a corona virus escaped from China and turned the entire world upside down.

As races were cancelled and everything put on hold, writing became my way to cope with the anxiety and fear I felt trying to survive this dramatically changed world.   As the months wore on, my mental health continued to decline until I was diagnosed with Obsessive Compulsive Personality Disorder, or OCPD.  The blog that was started to keep me accountable with my marathon running had transformed into a blog to help me cope with my mental health in the midst of a raging global pandemic.

My goal for my blog at this point is to just be heard, be read, and grow a following.  The theme of my blog—exceptionalism, empathy, kindness, and acceptance—are in short supply these days, so I hope my ideas can grow and make this world a better place.