After 9/11, my mother suffered a mental breakdown.  I was living with my parents at the time, and working as a public skate guard at an ice rink about 45 min away from home after being laid off from my first chemistry job in April.  She had always been nervous about my more independent nature, as she rarely did anything alone, but as she lost touch with the reality that I was an adult, I wasn’t allowed to leave the house without a cell phone and promises to check in.  (There was one incident where I was working the Friday night public skate, and because the police station was two doors down, an officer was parked outside the rink entrance as I walked out of there and to my car.  I figured that since I was super-safe, I wouldn’t have to check in with her.  I walked in the front door to my mother, so convinced that something bad had happened to me, was about to call the police.)

I lived in that environment for about a year and a half before taking a job as a traveling consultant and buying a home of my own.  While I was traveling the country and making mistakes and learning, my mother’s fear of something happening to me if I left my safe suburban life remained in the back of my head.  I rarely would even travel to Chicago, outside of the trips to the airport required for my job.  When I commuted to Princeton, NJ in 2008, the idea of going to New York City, visiting Times Square and the Statue of Liberty and Ellis Island alone was out of the question.

After a fantastic Chicago Marathon with the Muscular Dystrophy Association, I learned they had a New York City Marathon team.  The two marathons would be three weeks apart this year, so I signed up for both, with a goal to raise $7500, a test to see if I’m ready for Boston or London’s charity fundraising requirement.  In the excitement of knowing I would be finishing another major marathon, it never occurred to me that I might be a solo traveler; I was in a relationship at the time, and usually a few people from my run club might get in by lottery so there might end up being a nice group.
In the end, there were five of us:  three who qualified by time, myself, and someone who did get in via lottery.  However, I was the only one who wanted to expand the trip into more than running a marathon, and by summer, my boyfriend and I were through.  I booked my trip solo, renting an AirBnB in Harlem for a few nights after the race and purchasing tickets for both the Statue of Liberty and the 9/11 Museum.  I figured that I had three days before the race with both my charity team and my Libertyville Running Club teammates to get an understanding about the city, and I’d have my smartphone and Uber.  And of course, that 26.2 mile jog from Staten Island to Manhattan.

I flew into LaGuardia, and immediately, there were people in running shoes and jackets everywhere.  Talking to the lady at the information desk, I scrapped my plan to take an Uber because she said the subway was so easy.  And it was.  I came out only three blocks from my hotel, and really, it was no different than wandering around the Chicago Loop.  Win!  I also discovered my Maps app had directions via public transit, which made everything super-easy, especially later in the trip.

Between the LRC and MDA, all of my meals, my walk to the expo, and even getting to the bus in front of the library race morning were with friends.  Two of us even walked around Times Square.  The best moment was walking down the peanut butter aisle in Whole Foods the night before the race and realizing that there was no way for them to prepare the amount of bagels and peanut butter needed for all those runners, staying in hotels around Midtown.  Total apocalypse.  I grabbed the closest thing, plus two cookies to counteract the super-garlicy bread at dinner, and decided to make do with what I’m thrown. 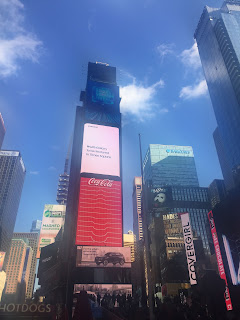 Actually, that became the theme of race day.  While the race starts at 9:40 am (and my wave at 10:35 am), we had to be up at 4:15 am to make a bus to get from Manhattan to Long Island.  I woke up healthy (which is a fear when the dry hotel air is giving me a slight tickle in my throat) and ready…..to sit on a bus for two hours and then the start village for another two.  In stop and go traffic.  So in the midst of balancing hydration and nutrition and digestion and porta-potties, I also had to consider the potential of motion sickness.  Fun times.  I distracted myself by meeting new people, but by mile 10, some issues arose that required me to focus on how I was going to keep putting one foot ahead of another.  A potty stop and shoe unlacing at mile 16, the realization that I was near PR pace at 19, and a near sprint to finish below five by the end.  The Wave 3 clock at the finish said 5:01, so I didn’t realize my time until I got back to my hotel and saw the texts from friends who were tracking me.  I collapsed on the hotel room floor, crying. 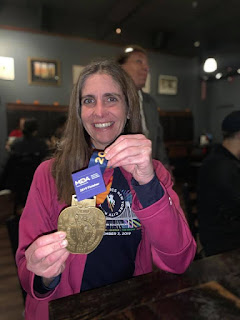 The race itself is now just a series of snippets, going by so fast that I barely remember it.  The quiet start up the Verrazano Narrows Bridge.  Running on the expressway as the UPS trucks used for bag check race by.  The welcomes as we entered each borough.  The noise and enthusiasm of loudspeakers and unofficial aid stations and even homes decorated for the race in Brooklyn.  The constant up and down of the road.  The runners from around the world.  The selfies on the Queensboro bridge.  The seemingly never-ending First Avenue.  Trying to wave to the motorcycle camera in the Bronx.  The long uphill into Central Park (Mile 23!), and just floating up and down the hills to the finish.  It was fun and glorious…..until I was in a crowded finish chute, barely able to put weight on my pained right foot, starting to chill.  It was such a long walk that after I got my poncho, I found a bench and sat down for a while.

After a warming shower at the hotel and an evening celebrating our accomplishments, my roommate, Kate, headed back to Chicago while I headed out to the Statue of Liberty and Ellis Island.  The hotel held my bags, so I hopped on the subway for the short trip to the ferry launch.  On the subway, a family got on with a toddler in a stroller.  The toddler crawled out of the stroller, and not understanding the rhythm of the train, stumbled and hit her head on a pole.  The entire car, made up of people of all backgrounds and cities of origin and tourists and languages, all gasped, almost in unison.  No matter what our differences may be, we are all human. 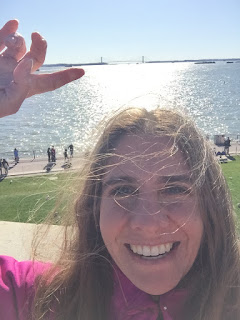 That became the theme as I traversed New York the next two days.  I finally saw the Statue of Liberty and visited Ellis Island.  I cried my way through the 9/11 memorial museum.  I stayed in a lovely garden apartment in Harlem.  I traveled by subway and quietly listened to two women trying to do good in the schools, just as I do on many a Thursday night.  I saw a community where the businessmen stand outside, greeting the people they see every evening.  I got takeout from the Queen of Soul Food.  I ate ramen at a shop hidden from the street.  I got a fist bump from the barista at Starbucks.  I got a great local beer recommendation (Interboro Brewing Double Fluffed Stout) from a Whole Foods employee.  I even got asked directions.  Sorry, it’s my first time here.  I took the bus to the airport, and waiting for my flight, met a server who had volunteered all day at the Biofreeze station.  I was told that New Yorkers are blunt and rude, but I found a strong sense of humanity and community.
In the end, I conquered New York twice.  Once on race day, but also navigating the city in the days afterwards.  Halfway through this journey, both five years and three stars, and I’m learning what a good traveler I’ve become over the years.  I’ve found not only the dream I want to pursue, but the passion and gumption to make it happen.  I took risks, overcame challenges, and rolled with the punches.  The scared little girl, trapped behind her mother’s anxiety in 2002, was now standing where they watched workers sift through the ashes and steel on TV every night.  Both that girl and that land has changed dramatically.  The pain and hatred inside of Ground Zero is now a beautiful place to reflect, remember, and memorialize.  The fear and insecurities in the little girl have been replaced with strength and confidence. 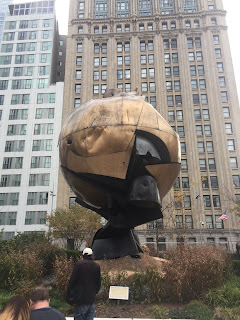 The Sphere, which was located on the plaza between the two towers

It may feel like the happily ever after ending, but these were the “easy” marathons, really.  The three remaining—Tokyo, London, and Boston—are much harder to gain entry.  I maxed out my network fundraising and came up just short of $5000, so work remains before I can apply to run for charity.  They are also going to be significantly more expensive than the three I’ve completed, between the two international major cities and the training regime needed to qualify for Boston on time, which is now a little over an hour.  Well, the biggest challenges in a trilogy always arrive at the very end, right?  So the journey continues, one step at a time….

Posted by Erin Westphal at 8:55 PM