Of Avengers and Presidents

Fall…is just the worst time of year for me.  Not only is the world losing the warmth and green and sun of summer, but September is the anniversary of my two longest relationships ending.  Just looking out the window at grey skies, seeing the dead leaves swirl in the chilly wind, makes me feel all the sadness in the world.

September is also the anniversary of the passing of a college classmate, killed while training for the Chicago Marathon in 2003.  Even the excitement and happiness of fall marathon season is twinged with sadness of what could have been for him, and I find myself thinking about Scott a lot during the “taper tantrum,” the last few weeks of training where you rest your body before Marathon Sunday.

Cue in…escapism via Hollywood.  Without the usual distractions of marathons this year, I found myself coping by catching up on the entire Marvel Cinematic Universe.  As self-care, it was perfect mind-numbing fun, and hey, I might as well get the most out of my free trial of Disney+ before it ends, right?

The one thing I noticed throughout the movies is that, outside of the plot to assassinate the President in Iron Man 3, the President of the United States is a non-entity, to the point that only Iron Man 3 is the only time an actor portrays the President.  Congressmen, United Nations, Cabinet members, military officials, but no President.  The Winter Soldier is a political thriller where the President is completely irrelevant, relegated to a name on the wall in a Smithsonian exhibit.

Shouldn’t Tony Stark have the President on speed dial?

Obviously, it’s Hollywood, and especially when you have something like 25 Avengers and who knows how many side characters in the last two films, there’s just not time—or plot—to include any sort of normal governmental response to events.  However, watching these films on the eve of a Presidential election, the lack of a President in 22 of the 23 MCU films stands out—and has me reflecting on the role of the President as defined in the Constitution.

The whole point of the President was for him (or her) not to become a dictator or a monarch.  He or she only carries one third of the power, sharing with the Supreme Court and Congress.  You can even argue, with their power to create laws and distribute funds, that Congress, a body of normal citizens elected by normal citizens, has slightly more power than the other two branches.  Rather than being led by one person, we are led by 545.  (President + Supreme Court + Congress)

The tweets and posts and grams and snaps (as in chat, not Gauntlet) about our Presidential election tell a very different story.  There seems to be this mythos within the American people that the US President is the most powerful person in the world, a modern-day Queen Victoria, who can do anything they want with a sign of the pen.  My social media feeds oscillate between posts describing how a candidate can fix every problem in our country to how a candidate will rule by fiat if elected.

The importance and weight we have put on electing a President is not unusual.  Since President Trump was elected, however, the amount of energy that has been given to every single Tweet or speech or action has been elevated.  The fear that the President can do whatever he wants, the anger and rage when the President does something undesirable, and the anger and rage of the people who are tired of the former’s anger and rage—it’s a constant stream of energy and attention.  However, nobody considers how all that energy is feeding the beast, inadvertently growing the power of someone who shouldn’t have all that much.  Perhaps I’ve just invented the next Marvel villain, a politician who feeds off of social media drama to the point of developing superpowers…

Seriously, people.  The Democratic Party has control of the US House, leaving the US Senate stuck between the President and the House.  (You want to know why Majority Leader Mitch McConnell is so wishy-washy?  He’s literally stuck between a rock and a hard place.)  The Supreme Court, even Trump’s own nominees, have shown independence in their decisions, continuing the history of taking each case as it is and comparing to the Constitution, rather than blindly following the President who appointed them.  The checks and balances are in place.  Our Constitution is working.  So why do so many Americans fear a President who can only have 30% of the power, and therefore, cannot do half of what he claims he can?

More importantly, why are you giving a man who clearly feeds off this negative attention so much brainspace in your life?

So take a piece of wisdom from the MCU and stop putting so much energy into our President.  The entire House of Representatives is up for re-election.  One third of the Senate as well.  Local officials, who have a greater ability to fix the problems in your community are up for re-election as well.  All people who help limit the power of the person in the White House. 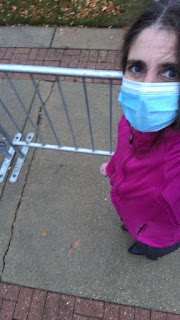 Voting, 2020 style...to be honest, I was there to help Mike Nerheim and Howard Cooper get re-elected as State's Attorney and Cororner more than I was interested in casting a vote for President.

That is, after all, what our Founding Fathers intended.  Who knew that the Avengers would be so wise in Constitutional law, paying attention to the people who actually held the power?

Posted by Erin Westphal at 10:09 PM No comments:

A Simple Cup of Coffee 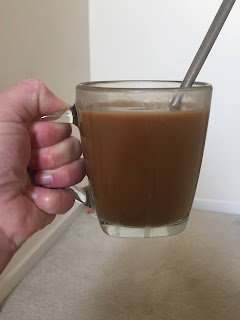 I have to start every day with my coffee and my ritual....

Step 4:  Fill kettle, place on stove, and turn on burner.

Not so simple, right?  With today being World Mental Health Day, I wanted to give you a glimpse of what it’s like to really, truly have Obsessive-Compulsive Disorder.  I start every morning with these 16 steps.  Every. Single. Morning.  Every. Single. Step.

When I do it perfectly, it brings me great satisfaction, calming my mind so I can focus on my day.  When I don’t, my mind is plunged into a chaos of anxiety and fear, and it takes an enormous amount of energy to find order in that mess and re-right the ship of my day.

The ritual keeps the monster of mental illness away, a monster of overloaded circuits and being so unable to think that I can’t drive, work, or be functional in any way, shape, or form.  It’s a battle I fight every single day, and no, it’s not as simple as “mind over matter.”  Trying to force my mind to be “normal” ends up causing physical issues, like insomnia or digestive issues.  Mental illness is truly illness.

This year has taken a toll on so many people’s mental health.  The pandemic, the lockdowns, the protests, the election have been so stressful, so traumatic, that anger and sadness fill our world.  Please take some time to listen, to learn, to grow, and to truly understand what it is like to live with mental illness.  Pledge to stop joking about “being OCD” because you want everything neat and clean and organized.  (It’s really, really not funny or cute or true.  OCD is a very complicated diagnosis where your brain is just not wired like everyone else’s.)  Commit to listening to others talk about their issues without feeling the need to give advice, because “what you would do” probably won’t work for someone else.

We still have a long way to go before this chapter of history ends, and we can only thrive if we face it with compassion and empathy for each other.  World Mental Health Day seems like a good place to start with a simple cup of OCD coffee.