Words Hurt as Much as Hands

“We should have never let you go to Lawrence.  You weren’t ready for college.”

“We watched the video from Colorado.  You were clearly miserable and not ready to go off to college. You should have stayed home and gone to MCC.”

Ah, Colorado.  The family vacation we took the summer after I graduated high school.  Since my school started much later than everyone else, my parents planned the trip in August….when all my friends were leaving for school.  Cue moody, miserable teenager.

This conversation, though, was many years later, when I was in my early 30s, and my parents were going through old photos and videos, one piece of the eventual sale of my childhood home.  It hurt to hear her discount all the hard work, all the scrimping and saving, all the effort we had taken as a family for me to get into—and afford—a rigorous, top-tier school.

Today is May 1st, decision day, and that memory always creeps in my brain as I think about my students and their college choices.  Spring has bloomed with college decisions and Mother’s Day….and blue children all over Lake County to raise awareness of child abuse. 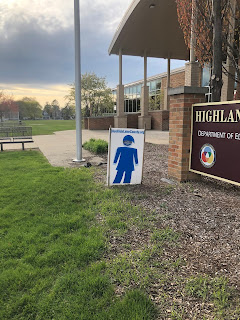 It all reminds me of my rocky, difficult relationship with my mother.

“Look at those girls,” my mom is saying to junior high me.  “Do you see them laughing at you?”

“No, where?”  I glanced around and saw two girls I didn’t recognize, whispering and giggling.

Maybe they were laughing at me, but they didn’t cast an impression on me.  I was a bit of a contrarian as a junior high kid, the type of kid who had a clear sense of who she was and where she was going.  I had zero interest in hair and makeup and clothes and celebrities, but loved science and math and Anne MacCaffrey and old movies and The Weather Channel.  I was looking forward to leaving the insular, small universe of my elementary/junior high (yes, one building for K-8) for the larger suburban high school, where there was a chance there were more kids like me, or even that buzzer thing they did on Head of the Class.  (There was.  We won conference my senior year, and I was named to the all-conference team.  I hope that plaque is still hanging in the hallway.)

The actual teasing and whispers and drama and gossip wasn’t so bad; we were all uncomfortable and struggling.  It was having to come home and have to rehash it in detail that had me terrified every day.  Most of my memories of eighth grade were standing at the foot of my parents’ bed, going through my day with my mom, who was analyzing everything I did and said, trying to suggest how I could have handled it better.  Hours spent staring at the bed, the wallpaper, trying to figure out how to make the conversation stop.

But the conversation never really stopped.  Her voice whispers through me at every social gathering, noticing every look or stare or awkward moment, her post-mortems in my head on the way home.  I look in the mirror, tired, never able to escape the lecture.

As children, we believe our parents are right.  They are acting in our best interests, and their unconditional love means they would never do harm.  They love us so much they would kill for us, right?  Just like we see in those PBS documentaries.

“Trying to get your ideas on paper is like pulling teeth.  What are you trying to say here?”  A mother in graduate school, helping her daughter get through World Literature in high school.  I swear, those Greek and Latin vocabulary lessons saved me so many times...

“What I wrote down.”

“Erin, it doesn’t make any sense.  Here, you should rewrite it this way.”

Despite working on her masters’ degree in social work, my mother was always willing to help me.  While science and math came easily to me, writing did not.  I loved to read, but I saw a very different world in the literature we were reading—and my need to put the words perfectly on paper impeded my ability to communicate those thoughts.

As we’ve learned this year, parents aren’t always the best person to teach their children, and this was a textbook example.  She didn’t have the training to help me in a way that would encourage me, and as someone where every other aspect of school came easily, the discouragement factor was high.  Every session eroded my confidence in my writing skills, to the point where I didn’t think I could complete an assignment without her help.

It took four tough, grueling, frustrating years at Lawrence before I believed I was an adequate writer.  Four years of writing and editing and essay tests and term papers.  I had chosen a school that required formal, written lab reports and math assignments.

Four years of doing The Grind.

While college isn’t this happy, idyllic memory, I am so grateful for the growth and strength it gave me.  A lot of who I am today came from those difficult times.  Perhaps that’s why my mother’s comments about those four years—and wishing she had kept me home—stung so much, even ten years after graduation.

“We’d go to teacher conferences, and they kept asking me, ‘why is she so afraid of you?’ I didn’t know what to say, because that’s not how you behave at home.”

Her tone was part frustration, part exasperation, and part accusatory.  My father was on the school board, while my mother was active in the PTA.  In a small school where many of my teachers were also parents, they knew my family, my home, and there were no red flags of abuse.  It didn’t make sense.

To her.  Here I was, in my thirties, and it was the first inkling that maybe her way of parenting wasn’t healthy or right for me.  When I started therapy and unpacking my childhood, I learned that her behavior had crossed the line towards abuse.

What we truly don’t understand until we become adults is that our parents are the products of their own childhoods, their own brokenness from their own parents.  Many abusers were actually victims of abuse, never having dealt with their own trauma, and children are very good at testing their parent’s patience.  Parents who don’t have the practice and skills to handle such difficult situations…make mistakes.

I will never say that I was an easy child.  The double-whammy of high IQ and undiagnosed mental illness is tough for even the best of parents.  My mother was a fixer, needing to correct everything around her, while I was this mess of a brain that didn’t stop and couldn’t calm.  It was a perfect storm of conflict, the child who didn’t have the language to express the fireworks in her brain and the mother whose brain was so full of her own issues she didn’t have the skills to meet me at my level.

Instead, she tore me down verbally to gain the upper hand.  As long as she held my self-esteem, I was controllable.  Easy to parent.

We see child abuse as fists and anger, torture and neglect, but we don’t think about the words.  Words of misunderstanding and frustration, words that break confidence and trust.  It’s words that make a daughter who worked on three patents in nanocomposite technology, who got a job with the US House of Representatives, who medaled at a national figure skating championships, who finished nine marathons—believe she is the black sheep of the family, too much a contrarian, a monster, a dictator to be included.

Words matter.  Understanding matters.  Parenting is a hard job, one that, knowing what I know now, is completely beyond my abilities.  Good thing I never did settle down and have children.  The cycle is broken.  Healing is happening, and maybe some day I’ll be able to look at my mother and not feel her disappointment in me.

Not hear her words in my head.

An amazing read. I totally understand It's a lot of years since I left home, but a lot of what I do is to impress my parents and I still hear their harsh words whenever I think I'm failing.
The great thing here is that you're getting through and it seems you might just be able to see light at the end of the tunnel.
Thanks for sharing.

wow, thanks for sharing. As a fellow PG-er - I believe I was two years behind you (one year behind your sister). I found this posting from when I went on your Facebook - sadly, I was trying to find more info about a recent classmate's (from Prairie Grove/CLC) untimely death, and I saw this on your FB.

P.G. was kind of a weird fishbowl social situation, IMHO. My sister, Jenny Peterson, had a hard time starting in about 6th grade (when our parents were getting a divorce). Hindsight's 20/20, but it's too bad your parents couldn't have taken you to extra-curriculars outside of P.G. - that way you could've made friends just with a different group.

My niece went to the same school (Jenny Peterson's daughter), 1st grade - to almost to eighth grade graduation - except she had to switch schools right before the last trimester of 8th grade (horrible!) due to DCFS changes being filed against her primary caregiver (her grandma). DCFS isn't the enemy in this case - I'm the one who filed the complaint.

Sometimes words can hurt more than hands because words can stay in your head forever, constantly chipping away at your wellbeing.

Parenting is a hard job, no doubt, but that's not an excuse for psychotically abuse your children, or abuse them in any way at all. We're meant to be giving our children a better experience in life than what we got

Today's children are the adults of the future. Once we understand this idea, violence, abuse or other negative behavior disappears. Thanks for this interesting blog.